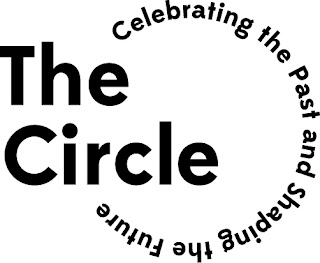 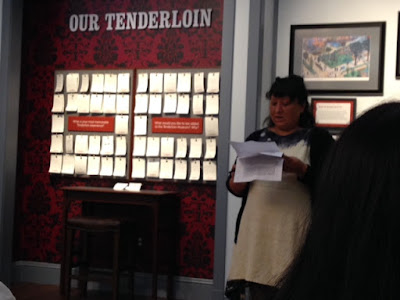 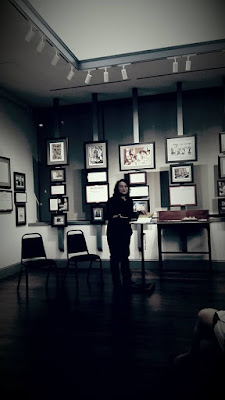 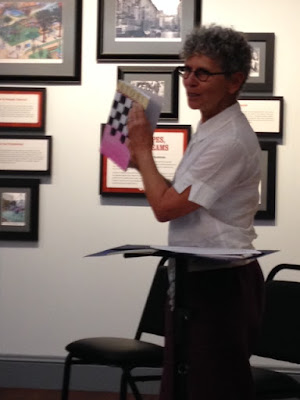 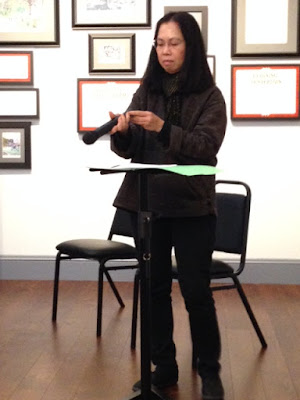 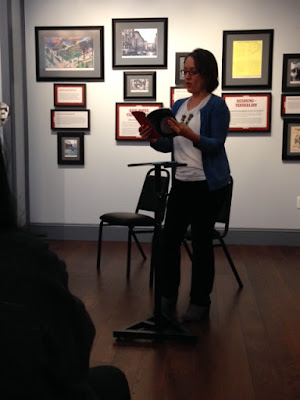 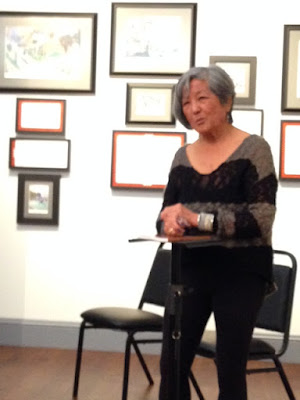 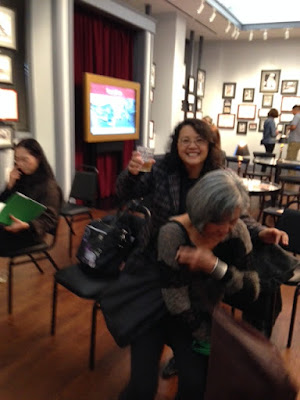 (Valerie good-naturedly took a photo of me doing something I'd never done before: photo-bombing someone, in this case Nellie Wong.  Because Nellie Wong.) 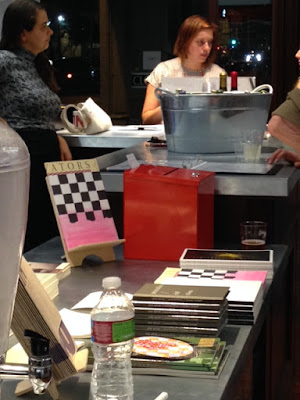 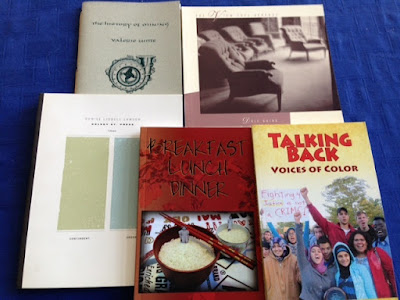 (I own most of Kelsey's books, but did manage to pick up some more books!)


I've had the wonderful task of curating Intersection for the Arts' 50/50 Poetry Nights in celebration of its 50th Anniversary.

For decades, the Tuesday Night Poetry Series by Intersection for the Arts gathered poets, “to share their newest writings in an informal, welcoming, and at times, raucous setting.” Although the Tuesday Night Poetry Series is no longer active it is my hope to channel the spirit of those readings by carrying Intersection’s literary commitment to poetry for four Tuesday nights this fall. Each event will be hosted by Small Press Traffic, Kelsey Street Press, Kearny Street Workshop, and Nomadic Press.


Bios:
Rena Rosenwasser helped found Kelsey Street Press in 1974, where she continues to serve as its co-director. Rosenwasser's poetry publications include ELEVATORS (Kelsey Street Press, 2011); Dittany (Taking flight)(Mayacamas Press, 1993); Unplace.Place (Leave Books, 1992); and three collaborations with artist Kate Delos. Currently a board member of Small Press Distribution, Rosenwasser has also served on the Literary Panel for the California Arts Council. She and her partner Penny Cooper reside in Berkeley, California.
Valerie Witte is the author of a game of correspondence (Black Radish Books, 2015) and the chapbook, The history of mining (ge collective/Poetry Flash, 2013). In 2014 she began a collaboration with Chicago-based artist Jennifer Yorke, and their artist books based on her manuscript Flood Diary appeared in the exhibition, “Quotidiean/Elements of the Everyday: Water,” held jointly at the CelerySpace gallery in Berkeley, CA, and La Porte Peinte in Noyers, France. She is a member of Kelsey Street Press and the Bay Area Correspondence School (BACS).
Nascha Poole is an extraordinary 4th grader. She loves nature and talking to wild animals. She has performed as a unicorn at SFMOMA under the wings of the poet Bhanu Kapil. She lives in a house of birds.
Originally trained as a musical composer, who received her two masters and Ph.D. from University of Illinois, Champaign-Urbana, Trinh T. Minh-ha is a world-renowned independent filmmaker and feminist, post-colonial theorist. She teaches courses that focus on women's work as related to cultural politics, post-coloniality, contemporary critical theory and the arts. She has also taught at Harvard, Smith, Cornell, San Francisco State University, the University of Illinois, Ochanomizu University in Japan, and the National Conservatory of Music in Senegal. Aside from the eight books she has published, her work also includes two large-scale multimedia installations and six feature-length films that have been honored in twenty seven retrospectives around the world: Reassemblage (1982), Naked Spaces (1985), Surname Viet Given Name Nam (1989), Shoot for the Contents (1991), A Tale of Love (1996), The Fourth Dimension (2001), and Night Passage (2004) .
Eileen R. Tabios is a poet, fictionist, cultural activist, critic, publisher, editor and visual artist. She loves books, and thus has released about 30 collections of poetry, essays, fiction and experimental biographies from publishers in nine countries and cyberspace. She has also edited or conceptualized ten anthologies, including VERSES TYPHOON YOLANDA, a fundraising anthology for Haiyan survivors that involved 133 poems by Filipino poets from around the world. She believes in no separation between “life” and “art.” She received her B.A. in Political Science from Barnard College and M.B.A. in economics and international business from New York University’s Graduate School of Business. More information is available at www.eileenrtabios.com....
Poet and activist Nellie Wong was born in Oakland, California. She is the daughter of Chinese immigrants, and in her poetry and through her community activism, she confronts social problems such as racism, sexism, and labor issues. Her collections of poetry include Dreams in Harrison Railroad Park (1977), The Death of Long Steam Lady (1986), Stolen Moments (1997), and Breakfast, Lunch, Dinner (2012). With Merle Woo and Mitsuye Yamada, Wong coauthored 3 Asian American Writers Speak Out on Feminism (2003). She is one of the founding members of the writing collective Unbound Feet, and her poems have been installed in public sites in the San Francisco area.

Kelsey Street Press was founded in 1974 to address the marginalization of women writers by small press and mainstream publishers. From the beginning, we linked our editorial policy to a poetics of allowance, encouraging women to write directly from their own creative imperatives, and to a poetics of inclusion that embraces racial and cultural diversity. In the eighties, we instituted a series of cross-genre collaborative works between poets and visual artists. A decade later, as our list included more established writers, we created the Frances Jaffer Book Award and, then, the FIRSTS! series to assure continued support of emerging poets. Our early books were handset and printed two pages at a time on a basement letterpress. Now we are exploring the interactive capabilities of the electronic media. At the heart of the Press remain the pleasures of the written page, books that can be held and carried, and ongoing participation in a continually changing poetry community.